I’m doing something a little bit different with my waiting on Wednesday post this week. Rather than choosing one book that is coming out sometime soon, I’m going to give a little preview of all the books I have ARCs for that are coming out next week. With everything that’s going on right now, and the resulting cancellations of tours and launches (which I completely agree is necessary, obviously) I feel like these books and authors can use all the extra shout outs we can give them.
So, there are loads of books coming out next week – I feel like 31 March is a really big release date!
My stack of ARCs for books releasing next week is pictured below – all of these are books I have received free from their publishers, and mostly I won’t have read them yet. Hopefully I’ll check in over the next little while with reviews of most of them! I’m also going to put in the synopsis of each book and a link so you can add it to your Goodreads shelf.
These are all available for pre-order now and will hit shelves next week – use your local indie bookseller if you can (so many of them are offering free delivery at the moment). 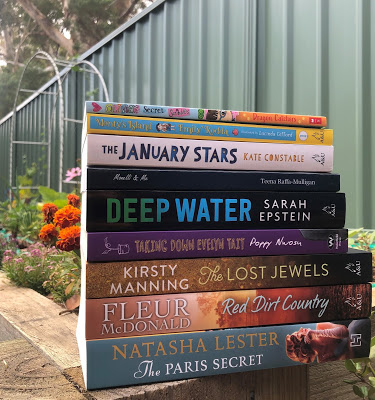 Studious Jude, the boy next door, has the perfect war plan. Lottie will beat Evelyn at her own good-girl game, unveiling Miss Perfect’s sinister side in the process.

Taking life more seriously starts as fun, but soon offers its own rewards . . . so long as Lottie can manage gorgeous Sebastian’s sudden interest, Jude acting weird, and the discovery that she might actually be good at something.

Out 31 March 2020
The Lost Jewels :: Kirsty Manning :: Allen & Unwin
On Goodreads
Present Day. When respected American jewelry historian, Kate Kirby, receives a call about the Cheapside jewels, she knows she’s on the brink of the experience of a lifetime.

But the trip to London forces Kate to explore secrets that have long been buried by her own family. Back in Boston, Kate has uncovered a series of sketches in her great-grandmother’s papers linking her suffragette great-grandmother Essie to the Cheapside collection. Could these sketches hold the key to Essie’s secret life in Edwardian London?

In the summer of 1912, impoverished Irish immigrant Essie Murphy happens to be visiting her brother when a workman’s pickaxe strikes through the floor of an old tenement house in Cheapside, near St. Paul’s Cathedral in London. The workmen uncover a stash of treasure—from Ottoman pendants to Elizabethan and Jacobean gems—and then the finds disappear again! Could these jewels—one in particular—change the fortunes of Essie and her sisters?

Together with photographer Marcus Holt, Kate Kirby chases the history of the Cheapside gems and jewels, especially the story of a small diamond champlevé enamel ring. Soon, everything Kate believes about her family, gemology, and herself will be threatened.

Red Dirt Country :: Fleur McDonald :: Allen & Unwin
On Goodreads
Recovering from an undercover case in outback Queensland, Dave Burrows finally returns to Perth, to join his pregnant wife, Melinda, and their small daughter, Bec. Things have been off-kilter between Mel and Dave for some time and nothing he says or does seems to make it right. Once Dave starts waking violently in the dark nights, reliving the horrors of the Queensland job, Mel issues an ultimatum.

But Dave’s work, despite its dangers, means everything to him. He’s finally achieved his long-held dream and is now a Detective Senior Constable in the stock squad. And as soon as his shoulder wound is declared fully healed, Dave jumps into an investigation of stock theft in the north of Australia. There’s a standoff between two stations and a history of disappearances and grief to uncover.

It’s also a long way away from his problems with Mel.

With the prospect of going back to Queensland to give evidence as a protected witness, a dangerously ruthless enemy on the loose, and a family to protect, Dave’s first experience on the stock squad is deep in an underbelly of racial divide with family secrets, long-repeated lies, kidnapping and murder.

Paris, 1947 Designer Christian Dior unveils his extravagant first collection to a world weary of war and grief. He names his debut fragrance, Miss Dior, in tribute to his sister, Catherine, who worked for the French Resistance.

Present day Australian fashion conservator Kat Jourdan discovers a secret wardrobe filled with priceless Dior gowns in her grandmother’s vacant cottage. As she delves into the mystery, Kat begins to doubt everything she thought she knew about her beloved grandmother.

An unspeakable betrayal will entwine all of their fates.

Monelli & Me :: Teena Raffa-Mulligan :: Sea Song Publications
On Goodreads
Fifteen-year-old Kate Norton has been living a happy family fantasy. Her mum has been keeping secrets. Now the father Kate never knew she had is coming to Perth. He wants to take Kate back to Brisbane with him because his mother has cancer and wants to get to know her only granddaughter before it’s too late. Kate is on an emotional roller coaster. Everything she believed about herself and her life has been based on a lie. Her wonderful dad is not her father. Even her beloved Nana Hannah is not her “real” grandmother. Kate has to find out who she is and where she belongs. Only then can she find out if her friendship with newcomer Joshua Perrin can be something more. 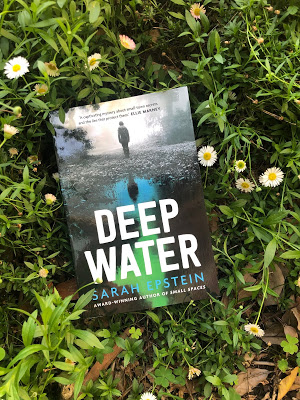 Deep Water :: Sarah Epstein :: Allen & Unwin
On Goodreads (see my post from last week about this one too!)
Henry Weaver is missing.
Three months ago, thirteen-year-old Henry disappeared from The Shallows during a violent storm, leaving behind his muddy mountain bike at the train station.

Mason Weaver is trapped.
While Mason doesn’t know who he is or what he’s capable of, he knows the one thing binding him to this suffocating small town is his younger brother, Henry.

Chloe Baxter wants answers.
Why would Henry run away without telling her? One of Chloe’s friends knows something and she’s determined to find out the truth.

As Chloe wades into dangerous waters and Mason’s past emerges, a chilling question ripples to the surface: how far would you go to keep a secret?

Monty’s Island #1: Scary Mary and the Stripe Spell :: Emily Rodda and Lucinda Gifford :: Allen & Unwin
On a tiny island far away, in a sea that ripples with magic, Monty never knows what he might find…

Monty, Tawny and friends receive some startling news: Scary Mary and her pirate crew are on their way, looking for a new island to call home.

What can they do? There’s no way they can hide – especially when Bunchy accidentally turns the whole island stripy with her new magic wand.

It’s going to take one of Monty’s best ideas to save them!

The January Stars :: Kay Constable :: Allen & Unwin
On Goodreads
When twelve-year old Clancy and her fourteen-year-old sister, Tash, visit their Pa at his aged-care facility, they have no idea that the three of them will soon set out on an intrepid adventure.

Along the way there are many challenges for Tash and Clancy to overcome and in the process, they discover their own resourcefulness and resilience and demonstrate their heartfelt love for their grandfather. 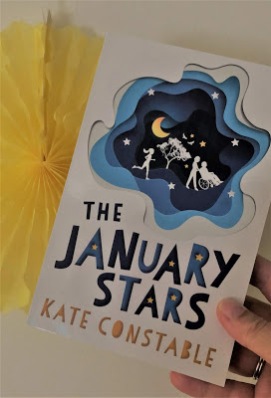 Out 1 April 2020
Olivia’s Secret Scribbles #8: Dragon Catchers :: Meredith Costain and Danielle McDonald :: Scholastic Australia
I have SO many super-amazing and IMPORTANT things to write about! Ill tell you all about them: My family and I are going camping at Dragontail Creek!!! My BFF, Matilda, is also coming with us. But there are strange noises in the night. And we found some interesting tracks in the dirt!!! Could there be a dragon in our campsite??? One thing is for sure, its time for Matilda and I to go dragon catching! Olivia x
***
Thanks so much if you’ve made it this far! I know this is a super text-heavy huge post, but I’m not sure the best way to do this otherwise. I thought about putting in pictures of all the covers, but would that make it tooooo long? Or better? – all suggestions and feedback welcome!
xo Bron