Hello! I always think October feels so much later in the year than September, and here we are already!
September was a pretty slow reading (and blogging!) month for me – I finished two books in the first half of the month, and didn’t pick up much else. This is mostly because I’ve been busy doing all kinds of other things – some sewing, bingeing TV series (hey Chesapeake Shores!), and some gardening now that the weather is getting to be so lovely!
I also seem to have found myself in the middle of three different books – which is a bit unusual for me since I’m generally a one book at a time kind of person.
Tonight I thought I’d share my current reads. I am actually really enjoying all of these, I’ve just been easily distracted over the past few weeks which has meant I’ve been putting things down when I spot something new and exciting. So, here they are… 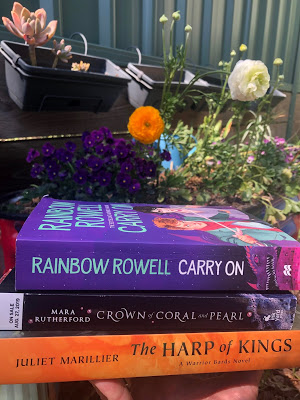 Carry On – Rainbow Rowell
I picked this up about two weeks ago to join in with The YA Empire’s read-along, in preparation for the sequel coming out week. It’s the one I’ve been reading most recently, and I’m pretty certain I will finish it tomorrow.
Crown of Coral and Pearl – Mara Rutherford
This ARC was sent to me by the team at Harlequin Australia (Harper Collins) ahead of its release in August. I was really into the story (it is good!)  but put it down when I needed to read for one of the blog tours I did in September and haven’t picked it back up yet.
The Harp of Kings – Juliet Mariller
Another ARC (thanks to Macmillan Australia), I am about halfway through this and put it down when the Carry On read-along caught my attention. Again, I’m loving this book, and looking forward to getting back to it.
I’m hoping to get all of these read soon – not just because they’ve been excellent reads so far, but also I have so many things I would love to get to before the Christmas reading starts haha
I’d love to know if I’m the only one who can’t focus on one thing at a time just now – let me know in the comments what you’re reading!
xo Bron