Something a little bit special here today – I have the pleasure of participating in the Rogue blog tour (thanks to #macmillanaus and #AusYABloggers).

I absolutely adored this book – as I did the first book in the series (see my review of that one here) – and I was lucky enough to have the opportunity to interview auther A.J. Betts for my stop on the tour!

I’ll be back later in the week with a review, but for now please read on below to see our Q&A! 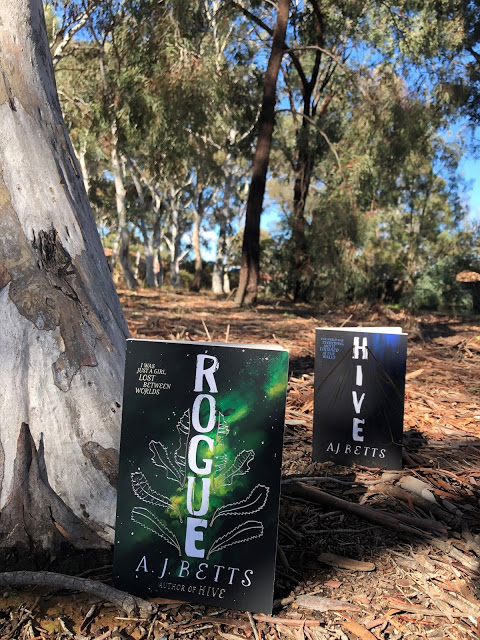 1) Do you remember when the idea for the HIVE duology first came to you and what inspired you to write it?
I sure do. I had the idea in 2005 as I was driving through the Graham Farmer Freeway Tunnel in Perth. I noticed drops of water dripping from the ceiling of the tunnel…and I liked the weirdness of it. I then had the image of a girl reaching up and wondering where it came from. Even though I knew where the water was coming from (it was raining outside), it got me thinking: what if I didn’t know? What if this was a mystery to me?Over many years, the questions – and answers – kept growing, until I began writing it properly in 2012, in between edits of ZAC & MIA.
2) Did you already know where you wanted to take your characters in ROGUE when you were writing HIVE? And has it ended the way you expected when you started the series?
I never knew the story of ROGUE, as such, but I had a sense of the adventure that Hayley would go on, and the forces that would influence her. I knew what the settings would be in this future world, and that the themes would be about discovery, consequence and courage. (I would say more, but I’m afraid of giving spoilers.) I didn’t know the characters she would meet along the way. These came to me as I spent time in the settings for research, and through the twists and turns of the first draft. I definitely knew how it would end – I always know the exact moment of finishing. The hard part is finding a satisfying way of getting there!
3) The HIVE duology is set in an imagined world, which is a departure from your contemporary novels. When you write, do the characters and their stories come to you first, or do you have an idea for a setting or situation that you then populate with characters?
I usually begin with setting, and only have a rough idea of characters (who I get to know better through the writing and editing process). Writing HIVEwas different in this respect, as the setting is fictional. I tried to ‘create’ the world before embarking on the story – with lots of sketches, and researching various building structures and futuristic underwater designs – but the world never felt authentic to me. After I while, I realised I had to build the world at the same time as drafting the story. This way, I got to experience the world as Hayley moves through it, and learn how it looks, sounds, smells and feels.  I also got to learn what she needs from the world, and how it can help and/or hinder her. It was quite organic, which required a lot of trust in the process.
4) Did you always set out to tell this story for a young adult audience in particular, and can you tell us your favourite thing about writing for teens?
I love writing teenage characters. It feels like they are on the cusp of something bigger; that their choices matter; and that their lives can go in any direction. When I write, though, I’m not thinking about teenage readers – or any readers at all. I’m thinking about the character and what she needs. Then, in the editing, I think about the world and what it requires, then the sound of the prose so it feels smooth and natural. I hope that young adult readers enjoy the story, as well as readers of all ages. My goal is to write good stories, and I think these are universal.
5) Are you currently working on something new you can tell us anything about?
I’m having a bit of break from writing. HIVEand ROGUE took me seven years to complete, and I became quite obsessed with them! I’m currently enjoying reading, DIY and travelling. I think it’s important to have some breathing space between books. Having said that, my mind is at work on the next one. It’s an idea I’ve been mulling over for four years already, so I know the characters and situation pretty well. When the time comes to sit down and commit to writing it, it’ll be heaps of fun.
6) Lastly, I’d love to know what you are currently reading, or whether there is something you have read recently and loved that you would like to recommend to us?
I’ve just finished reading Mark Smith’s ROAD TO WINTER. It’s the first book of his dystopian trilogy. It’s well paced, and I love the sparse writing. Today I’ll start AMELIA WESTLAKE by Erin Gough, and when that’s done, I’ll read the LAND OF FENCES, the second book by Mark Smith.
***
I can’t thank A.J. enough for answering my questions – I love getting a peek into writers’ processes and the thoughts behind their books!
Don’t forget to check back to see my review of Rogue later in the week, and thanks to Macmillan Australia and AusYABloggers for having me on the tour!
xo Bron

Spotted @maya.linnell.writes on the shelves at @pulpbookcafe today 💙🥰
#AdPRProduct
I have always loved magazines - it feels like such a treat to pick up something new to read with a cup of coffee on a Friday afternoon! This edition of @australiancountrymag is extra special because there’s an article on my friend and fabulous Aussie author @maya.linnell.writes (those are her flowers on the cover!).
#AdPRProduct
Starting my Friday in bed with a coffee in my beautiful new @mud.dept mug and @elliemarney’s brand new YA historical fiction thriller THE KILLING CODE, which is out next week. (Thanks @allenandunwin for my free copy!)
I love a book table like this one at the big gorgeous @harryhartogbookseller at ANU! Can you spot any favourite books here?