This evening I had the pleasure of going along to book club for (as far as I can recall) the first time this year!  We read Something to Live For by Richard Roper, which is a sweet and relatively light read about grief and friendship and love. 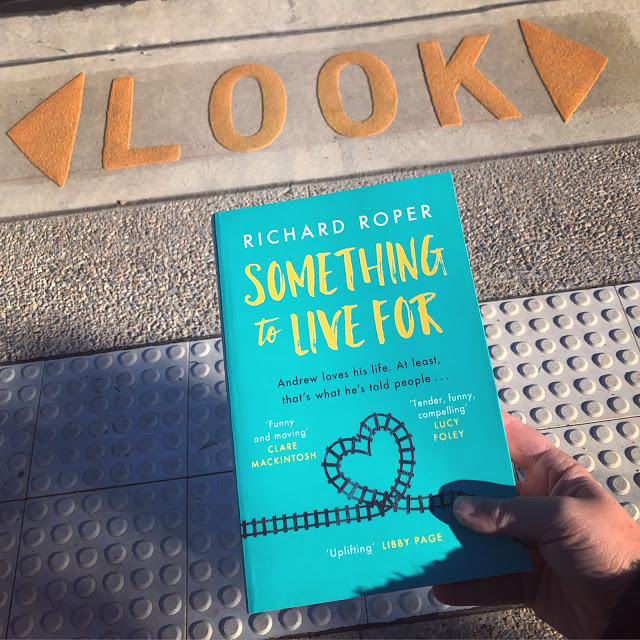 It was a hit overall – nobody really disliked it, although it was interesting that everyone had different bits or things about it that they liked or not.

I thought it was a nice read, and I enjoyed it, but not enough for it to be a favourite. There was something about the way the story was told that I felt kept me at arms length a bit – I never really had that feeling of experiencing something with the protagonist (Andrew), but always felt very aware of being on the outside watching. Interesting, I feel like Andrew seems to be having a similar experience in his own life – often he feels like a spectator watching from the outside – so maybe this was intentional.

There is a good cast of supporting characters in here, mostly they are quite caricature-ish and fairly two-dimensional, but they do add a lot of fun, and are probably the main reason the book gets away with feeling so light despite being about grief. It was also quite funny – I laughed out loud a few times – it reminded me of The Office.

Something else I though was worth noting about this book was that it has an alternative title and cover in other markets, where it is called How Not to Die Alone, and the cover has an illustration of a man (presumably Andrew). I am always fascinated to hear about cover and title choices, and think it is so interesting to see publishers make different decisions on these depending on the market.

We all had the opportunity to vote for next month’s book, and we chose Whisper Network by Chandler Baker, which sounds really good – I’m looking forward to it already!

One thought on “Book Club :: Something to Live For :: Richard Roper”

Are you ready for it?
We love a non-fiction/reference picture book here, and Phillip Buntings Me, Microbes& I was just the thing this week 💜
#AdPRProduct #GiftedBook
If you're in Australia and have a middlegrade reader in your life chances are you've come across Anh Do's WOLF GIRL series. So many of my daughter's classmates have loved their either for reading aloud with their parents or as some of their first independent reads as new readers.
This past week we've moved out of the Christmas season, and into my next favourite - AFLW season!
Now that the excitement of Christmas is almost over (tomorrow - or the next day, depending who you ask - is the 12th day of Christmas and our tree will be coming down) we are settling into school holidays and looking for things to keep the kid busy that aren’t all screen related. Naturally I’m shoving books at her left right and center, and I thought id share a couple of her faves in case anyone else is looking for bookish inspiration for their school aged kids too ☺️📚