Despite having a special place in my book-loving heart for Melina Marchetta since reading Looking for Alibrandi as a teenager, I hadn’t read any of her other books until her adult crime/thriller novel Tell the Truth Shame the Devil was released last year.  When that one came out I went with a friend to see her talk about it at a local book store (Muse – Canberra friends if you haven’t been yet you must check it out – they have the best events!). She was absolutely wonderful at the event, so I was thrilled to see that she would be back again with another new release this year. 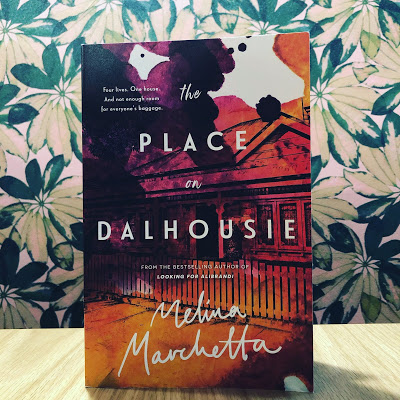 I picked up The Place on Dalhousie as soon as it was released, and was completely hooked from the first page. This is one of those immensely readable books, where I slip right into its world when I start reading, and an hour later realise I’m already a third of the way through. I have heard from a few people that they read this in just one or two sittings.

One of the things I find really magical about Melina Marchetta’s writing is the amount, and intensity, of feelings she manages to infuse her stories with. This one gave me ALL the feelings, and I really felt like I was right there by the characters. There are some really moving scenes – both due to them being so heartbreaking but also some that are really joy-filled.

The Place on Dalhousie is officially classified as adult fiction (the younger POV characters are in their early to mid twenties), but Marchetta does explore many of the same themes from her young adult work – belonging, family (biological and chosen), fitting in, standing out, and the way these things all contribute to who we are. There is also a sense of that coming-of-age feeling that is typical in young adult fiction, as the characters struggle to figure out where they belong and who they are. I’m not sure whether I would necessarily say the characters are culturally diverse, but there are characters from a couple of different backgrounds, including Italian. One of the things that I thought was really interesting (although I didn’t think about it much at the time – it was something that came up at the event we went to) was the difference in experience of two Italian families – one of which had come to Australia after the war when families were moving together and there were large communities building here, and the other that had come more recently, just parents and one child and been more isolated.

I went into reading this with pretty much no idea what it was about, so didn’t realise that it revisits the same group of friends Marchetta wrote about in two previous books – Saving Francesca and The Piper’s Son. I didn’t feel at all like not having read these two meant that anything in The Place on Dalhousie was hard to follow or didn’t make sense, even though there were a few bits where events from them were referred to. That said, my first thought on finishing this was that I wanted to binge read them and follow with a re-reading of this one – it is really that good!

As I mentioned above, I did have the opportunity to see Marchetta talk a little bit about this book, and her writing process more generally, at an event last week. If you ever get the chance to see her speak in person I absolutely recommend it! She is so open and honest with her answers, and couldn’t be more generous with her time – it was such a delight!

I gave this five out of five big bright shiny stars, and am already planning a re-read!