Confession time! When the people from Pan Macmillan Australiagot in touch to see if I wanted to review Two Dark Reigns – the latest release in Kendare Blake’s super popular YA fantasy Three Dark Crowns – I said yes even though I hadn’t read the first two yet (I did already own them though!). After binge-reading all three books over a weekend a few weeks ago I couldn’t believe I hadn’t read them sooner! These books are so good! I think you know my issues with reviewing a later book in a series (SPOILERS!), so I’m going to talk about the series as a whole. (Actually, on the subject of spoilers, these are books where you don’t want to read the blurb on the back of books 2 and 3 before you’ve read the preceding books, because they give a mini summary of where everything is up to).

So, here’s the Goodreads summary for the first book Three Dark Crowns
In every generation on the island of Fennbirn, a set of triplets is born—three queens, all equal heirs to the crown and each possessor of a coveted magic. Mirabella is a fierce elemental, able to spark hungry flames or vicious storms at the snap of her fingers. Katharine is a poisoner, one who can ingest the deadliest poisons without so much as a stomachache. Arsinoe, a naturalist, is said to have the ability to bloom the reddest rose and control the fiercest of lions.

But becoming the Queen Crowned isn’t solely a matter of royal birth. Each sister has to fight for it. And it’s not just a game of win or lose…it’s life or death. The night the sisters turn sixteen, the battle begins.

The last queen standing gets the crown. 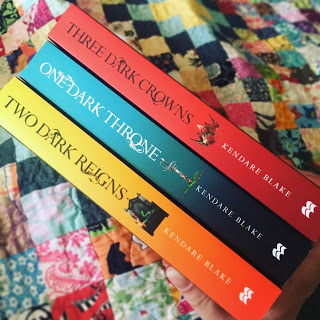 Like I said, series are hard to review  – so here are five things I loved about this one:
– The alternating POV chapters worked so well for me in this one and I felt like they really helped the plot move along (possibly because it meant I was reading the chapters in multiples of three, or however many voices were included in each book).
-It does this thing that I am just noticing that I love, which is that the setting could just be the real world, but a weird/magical/mysterious part of it (see also the islands in Scorpio Races and Three Dark Crowns)
-The plotting across the series is good – it doesn’t feel like a story that should have ended with book one and the author is trying to think of what should happen next to prolong it. It all feels like there is purpose. AND I really enjoyed the development of the characters through the three books.
– I like the internal struggles from the three main protagonists (and sometimes other characters) – they aren’t exactly good or evil but they feel like they have to do terrible things, which they recognise as terrible because of their destiny or something.
– I loved the world building and myth behind the story – it felt so rich and complete.
So, in case it isn’t clear, I ADORED these books – I am absolutely busting to find out how the series will end. I gave these each 4 stars and I’d recommend them to anyone who loves a good YA fantasy full of fierce female characters.
xo Bron
*** Two Dark Reigns ***
Out now from Pan Macmillan
On Goodreads
Source: Massive thanks to Pan Macmillan Australia for sending me a free copy to review
Genre: Fantasy (YA)
Find Kendare Blake online here