Last week I had the absolute pleasure of attending the launch of local Canberra author Sam Hawke’s debut novel, City of Lies. I was lucky enough to get my hand on an early copy AND managed to read it before the launch! 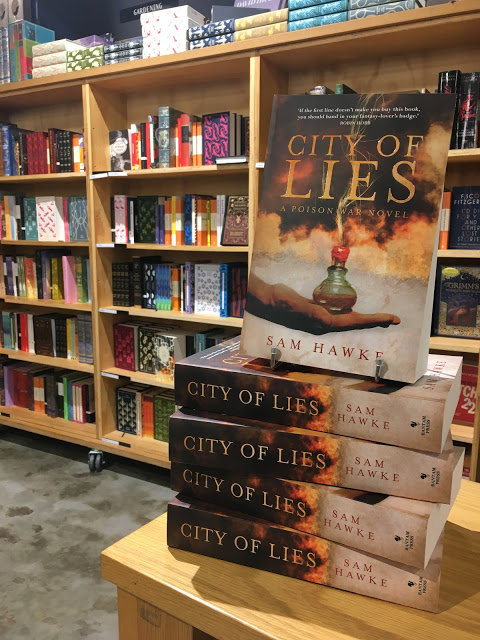 It was a fantastic evening. The event was held at Harry Hartog Booksellers in Woden, and there were soooo many people there (about a hundred, I think) and it always makes me so happy to see so much support from books stores and the community for our wonderful local authors!

Claire from Harry Hartog did an amazing job of hosting – she and Sam had great chemistry and the conversation was warm, fun, and insightful, and just a pleasure to watch. Sam was very funny, and I loved hearing more about her writing inspiration and process.

As for the book, I LOVED it. It is low magic fantasy, with a similar kind of feel to something like Game of Thrones – but without all the sexual violence. But alongside that gritty, almost medieval, epic fantasy feel, it is also a closed room murder mystery, where the reader gets all the same clues as the protagonists.

There are so many things I enjoyed about this one – here are a couple of my highlights:

– I felt like the world building was awesome. There is so much background and depth to the setting, society, and characters, and it is all given in a natural way rather than feeling like and info dump. Given the richness of the storytelling I was really surprised to hear that Sam writes in the details as she needs them for the story, rather than researching and setting out all the info at the start!

– I loved the subtle ways that the world was feministy, without screaming it on every page, like some other books I’ve read whether the author is playing with power and patriarchy in the society. For instance, in City of Lies, the family line is passed through the mother’s family, with women and men both taking positions of power in the society. The lack of toxic masculinity throughout was so refreshing!

– It was wonderful to see same sex relationships discussed in exactly the same way as M/F relationships, and just as often. The treatment of romantic relationships in the society is really interesting – women have children without attachment to the father, and instead nominate a close male relative to live with and to be mentor to their children (hence the main characters in the book having close relationships with their uncles).

– The characters feel real, and flawed, and are living with chronic disease, and mental health issues – this is a great contrast to the invincible characters we often see in fantasy.

– Despite being a pretty big book of epic feeling fantasy, and the fact that there’s a sequel on the way, City of Lies can totally be read as a stand alone. The main mystery in the book – who is the poisoner and how did they do it – is solved, so you could be satisfied with the ending as it stands. There are, however, a bunch of tiny threads to carry through to the next book, which I am completely busting to read (only a year to go haha).

Overall, I thought this was a brilliant read. It had me hooked from the very first line – “I was seven years old the first time my uncle poisoned me.” – and get me intrigued throughout. This was one of those magical books that breaks the rules of physics, and while it took a week or so to read the first half, somehow I got through the second half in the space of 24 hours!

As I mentioned above, I was provided with a free advance copy of City of Lies by the publisher (Penguin Random House), but I liked this one so much that I have bought myself a finished copy, and I am just thrilled to be able to tell everyone that will listen how much I love a new book by a local author!

*** City of Lies ***
Available now from Penguin Australia
On Goodreads
Source: I was sent a copy by the publisher but loved it so much I bought a finished copy too
Genre: Fantasy (low magic), with some closed room murder mystery
Find Sam Hawke online here