My final post for 2017 is a book stack! I have to admit, I love doing these! Books (like craft supplies) often live in stacks around my home – where I pulled some off the shelf to loan someone, or put together a TBR, or even just because the covers/spines look good together! So it is really fun to share them here, and it’s something I’m hoping to do more in 2018.

Anyhow, now to the books… 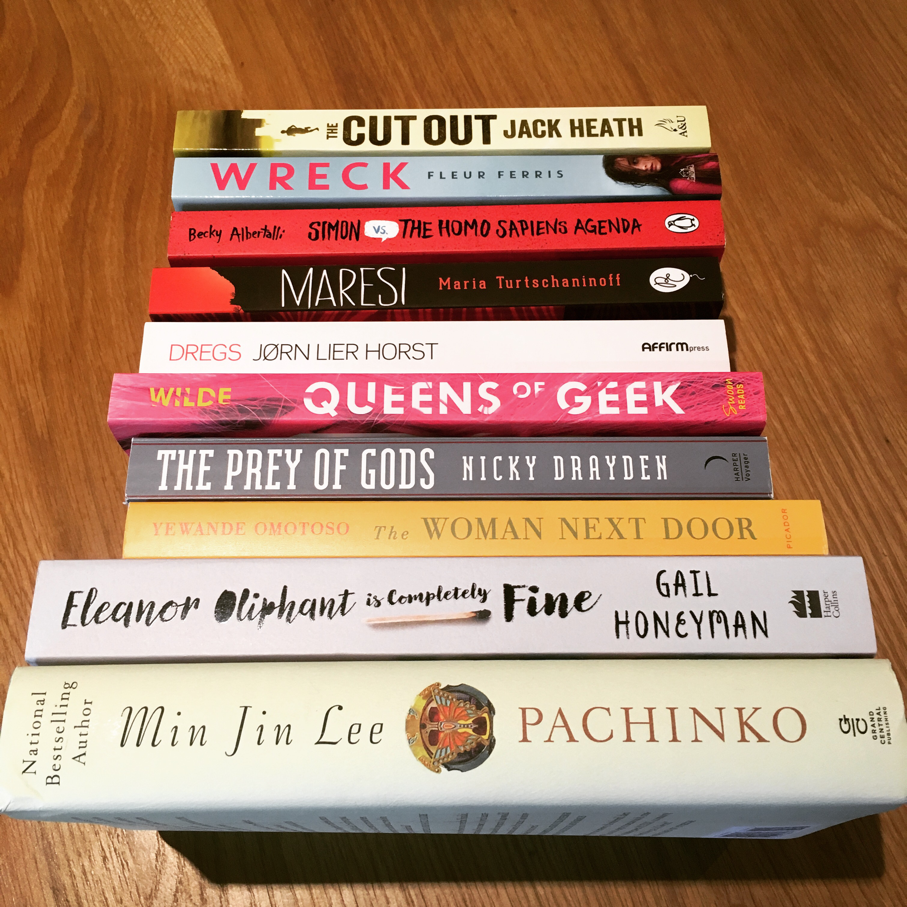 Like the title says, these are all books that have come into my possession since Christmas (I haven’t shared the ones I received for christmas yet, but there was a bit of a theme so I’m planning to talk about those in a week or two).
The following four (click the titles to go to their goodreads pages) came in Book Riot’s ‘Best of 2017’ book box (which I had conveniently forgotten that I had ordered – a lovely surprise from past me!)

Pachinko, The Woman Next Door, The Prey of Gods, and Queens of Geek. Pachinko and The Woman Next Door were both on my book radar and ‘to read some day’ list, so it is really cool to have copies of them. Also, the Woman Next Door will be an option for the ‘fenale protagonist over 60’ task in the Read Harder Challenge. The Prey of Gods I hadn’t heard of, but it sounds cool, and Queens of Geek I was SUPER excited to get my hands on – I’ve been keen to read it for ages and it’s #loveozya, which you know I’m keen to read loads of in 2018.

On the topic of the Book Riot boxes – I love them! You might think a buying a box of books from the US to Australia would be crazy expensive, but at US$100 (which was AUS$130 when I ordered) this qualified for free shipping (including international) and you get 4 books (including a hardcover) plus a few bookish bits – this time a calendar, a set of literary conversation started cards, and some bookish matchbooks (that look like books!).  So, excellent value in my opionion.
The other books there were from a shopping trip after Christmas, mostly on the basis that they looked/sounded cool =)
Eleanor Oliphant is Completely Fine – EVERYONE I know who read this absolutely raved about it, so I couldn’t resist it at half off!
Dregs – this is the first book to be translated in another Scandi crime series (from Norway).
Maresi – feminist YA fantasy in translation from Finnish? Yes please! The cover says it’s got a the Handmaid’s Tale flavour and Harry Potter excitement, and the people at Readings recommended it – so I’m in!
Simon vs the Homosapiens Agenda – how have I not read this yet? It’s another one people rave about and I really want to get to it before the movie comes out in 2018.
Wreck – I had this out from the library during the year but didn’t get a chance to read it then. It also made the top 10 books in the The (Tuesday) Book Club viewers’ list of favourites.
The Cut Out – Jack Heath is a local Canberra author, and another one I’ve been meaning to read for ages! This was in stock and on sale, so it seemed like the perfect opportunity to pick it up.
So, that’s my final book stack for 2017!
I hope everyone has a safe and happy New Year!
Xo Bron