I think I’ve mentioned here already how much I love a Christmas Hallmark movie, and tonight’s Christmas book is one that I could absolutely see adapted for the small festive screen! 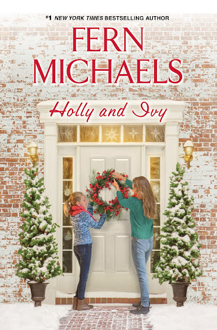 Here’s the overview (from Goodreads)
The flames of memory always seem to glow a little brighter during the holidays. Perhaps that’s why this time of year is so difficult for airline heiress Ivy Macintosh, as she faces thoughts of yet another festive season alone. Since the plane crash that claimed the lives of her husband and two children eight years ago, she’s been submerged in grief.

When eleven-year-old Holly Greenwood knocks on her door, lost and frightened after a forbidden visit to her singing teacher, Ivy’s self-imposed exile is shattered. Holly has an extraordinary voice, and wants nothing more than to perform in an upcoming Christmas musical. Holly’s father, Daniel, doesn’t allow music in their home, refusing to give a good reason why–just as he refuses to talk about Holly’s mother. Ivy has no idea how closely she and Daniel are linked by their tragic pasts, yet she’s drawn to the warmth she senses beneath his gruff exterior. And as Christmas nears, their shared concern for Holly begins to draw Ivy back into the world again . . . and toward a family who may need her just as much as she needs them…

As you can tell from the synopsis there, this was not all light hearted and fun – there were some super sad bits, and some pretty heavy feelings stuff too. Like I said above, it certainly had a Hallmark movie feel about it – two grieving adults brought together by common love for a child.
It took a while for me to get into the story, but once I did I really enjoyed it overall. There were,though, definitely sometimes where I had to look past what I really thought was some weird behaviour/actions from the characters – if you find it hard to let go of “someone would never say/do that!” and it’s a deal breaker for you, then this one might be a bit tricky.
I gave Holly and Ivy three stars
Xo Bron
Holly and Ivy  is out now. I received review an e-book copy through NetGalley in exchange for an honest review, but only chose to read it because it sounded like a book I would enjoy (life’s too short to read books we don’t think we’ll enjoy). All opinions on my blog are my own, and I wouldn’t tell you it a book was good if I didn’t really think so. =)

I finished reading A Holly Jolly Christmas by @author_katiemontinaro today. I'm always keeping an eye out for Christmas romances with summer setting that reflect our experience and I thought this one had a great Aussie feel to it. I loved the characters and the way the relationship developed, and also really appreciated the bits about real life vs what people present to the social media world (I felt like this was done thoughtfully and without feeling judgey).
I read this beautiful book - The Goodbye Year by Emily Gale - on the weekend and have popped some thoughts up in a review on my blog (bookishbron.com). It was truly such a lovely, heart-warming, hope-filled story, set in protagonist Harper's final year of primary school - which just happens to be 2020. I found the writing really sensitive and authentic, and enjoyed every moment with Harper as she navigated friendships and family changes and growing up all with her world turned upside down. I loved the supernatural elements to the book too, and the way those parts of the story complemented Harper's experience so well (I don't want to give spoilers!) Check out my full review on my blog where I'm recommending this one for kids who love a contemporary story they can relate too. I also think this would be a lovely one to read with the young people in your life, either as a read aloud or separately to talk about together.
We had a lovely weekend in Sydney - obviously we started with the big @dymocksbooks on George St, which was looking very festive!
My next read is going to be this gorgeous dark fantasy novel by @talltales_poppynwosu 😻 ioved the short story and novella prequels and can't wait to get into this! Poppy kindly sent me the copy but it's out very soon - tomorrow I think! ❤️
Currently reading @kate.schumacher.writer’s HEART OF FLAME, which comes out I. Just a few days (Kate sent me this free early ecopy for review).
I always love seeing what my 8yr old brings home from the school library - recently she borrowed this book, a Tudor girl's diary about Catherine of Aragon by Alison Prince.