There was quite a bit of buzz around this book, and when it was being described as Buffy-esque there was no way I could resist checking it out. 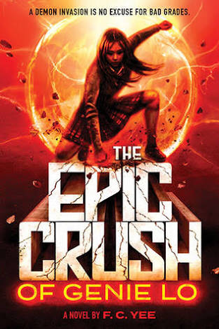 The struggle to get into a top-tier college consumes sixteen-year-old Genie’s every waking thought. But when she discovers she’s a celestial spirit who’s powerful enough to bash through the gates of heaven with her fists, her perfectionist existence is shattered.
Enter Quentin, a transfer student from China whose tone-deaf assertiveness beguiles Genie to the brink of madness. Quentin nurtures Genie’s outrageous transformation—sometimes gently, sometimes aggressively—as her sleepy suburb in the Bay Area comes under siege from hell-spawn.
This epic YA debut draws from Chinese folklore, features a larger-than-life heroine, and perfectly balances the realities of Genie’s grounded high school life with the absurd supernatural world she finds herself commanding.

So, as it turned out, this was totally fun!
I don’t want to give anything away, so here are my three favourite things about it…

For some reason I always sort of split my YA into younger readers and other (since there could be a pretty big difference between something a 12 or 13 yr old might read/be ready to read, vs an 18 yr old) and I would be pretty comfortable with this sitting at the younger end of the scale (possibly even middle grade?).

The Buffy comparison rang pretty true for me, in terms of Genie being a kind of reluctant ‘chosen one’ heroine battling between the obligations that come along with that and her ‘regular’ life. Also, so pretty crazy ‘big bads’. It also had shades of the Invisible Library (because alternate worlds, maybe?), and also Ms Marvel (the flawed teenage female superhero, figuring out that having ‘powers’ isn’t quite what they expected).

I gave this three stars.

The Epic Crush of Genie Lo by F.C. Yee is out now from ABRAMS Kids. I received an e-book copy in exchange for an honest review, but only chose to read it because it sounded like something I would enjoy (life’s too short to read books we don’t think we’ll enjoy). All opinions on my blog are my own, and I wouldn’t tell you it was good if I didn’t really think so. =)