**I received a free copy of this book in exchange for an honest review. All opinions are my own.**

GATHER THE DAUGHTERS tells the story of an end-of-the-world cult founded years ago when ten men colonised an island. It’s a society in which men reign supreme, breeding is controlled, and knowledge of the outside world is kept to a minimum. Girls are wives-in-training: at the first sign of puberty, they must marry and have children. But until that point, every summer, island tradition dictates that the children live wildly: running free, making camps, sleeping on the beach. And it is at the end of one such summer that one of the youngest girls sees something so horrifying that life on the island can never be the same again. 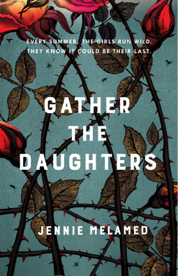 I’m not going to lie – I knew pretty much nothing about this book when I sent the review request, except that I liked the cover (yep I’m that reader) – so I really didn’t know what I was in for. I was pleased to find out it was a cult story – I read a couple last year (earlier this year?) and found them really interesting. Whilst you do get hints of there being an ‘outside world’s, this felt more dystopian society than cult to me.
It felt kind of Handmaid’s Tale-ish and a bit Lord of the Flies. As well as being cult-y, it was also pretty creepy – reading it was often uncomfortable (in a Handmaid’s Tale kind of way), particularly where it talks about the ways the girls are mistreated (not graphic, but gross nonetheless).
Despite the ick, I found this hard to put down. Now feels like perfect timing for this release.
I gave it 4/5 stars
Xo Bron
Gather the Daughters by Jennie Melamed is out now from Hachette Australia. I received an e-book copy in exchange for an honest review, but only chose to read it because it sounded like something I would enjoy (life’s too short to read books we don’t think we’ll enjoy). All opinions on my blog are my own, and I wouldn’t tell you it was good if I didn’t really think so. =)