Gork isn’t like the other dragons at WarWings Military Academy. He has a gigantic heart, two-inch horns, and an occasional problem with fainting. His nickname is Weak Sauce and his Will to Power ranking is Snacklicious—the lowest in his class. But he is determined not to let any of this hold him back as he embarks on the most important mission of his life: tonight, on the eve of his high school graduation, he must ask a female dragon to be his queen. If she says yes, they’ll go off to conquer a foreign planet together. If she says no, Gork becomes a slave.

Vying with Jocks, Nerds, Mutants, and Multi-Dimensioners to find his mate, Gork encounters an unforgettable cast of friends and foes, including Dr. Terrible, the mad scientist; Fribby, a robot dragon obsessed with death; and Metheldra, a healer specializing in acupuncture with swords. But finally it is Gork’s biggest perceived weakness, his huge heart, that will guide him through his epic quest and help him reach his ultimate destination: planet Earth.
A love story, a fantasy, and a coming-of-age story, Gork the Teenage Dragon is a wildly comic, beautifully imagined, and deeply heartfelt debut novel that shows us just how human a dragon can be. 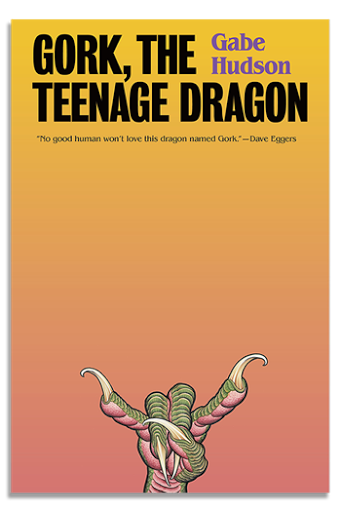 If you think this books sounds weird, you’re right – it was pretty weird! And towards the end it got really weird, and also pretty gruesome. To be honest, I think I liked it better once I had finished than I did while I was reading – I spent quite a bit of time thinking “what am I even reading” and then my first thought when I finished was “that was GOOOOOOD!”
It was funny – there were bits that made me laugh out loud, and bits that I read out to my partner because I thought they were so funny. I also really liked the resolution and the message at the end.
I’m not really sure if I have a good read-alike, but it reminded me a bit of reading Magnus Chase, although would probably be suitable for a bit older audience. It had a similar young, male, kind of annoying, self-depricating protagonist.
Overall, a fun but weird read – a good one for the teenage reader in your life (maybe especially boys?)
I gave it 3/5 stars.
Xo Bron

Gork, the Teenage Dragon by Gabe Hudson is out now from Knopf Doubleday Publishing. I received an e-book copy in exchange for an honest review, but only chose to read it because it sounded like something I would enjoy (life’s too short to read books we don’t think we’ll enjoy). All opinions on my blog are my own, and I wouldn’t tell you it was good if I didn’t really think so. =)