India Maxwell hasn’t just moved across the country — she’s plummeted to the bottom rung of the social ladder. It’s taken years to cover the mess of her home life with a veneer of popularity. Now she’s living in one of Boston’s wealthiest neighbourhoods with her mum’s fiancé and his daughter, Eloise. Thanks to her soon-to-be stepsister’s clique of friends, including Eloise’s gorgeous, arrogant boyfriend Finn, India feels like the one thing she hoped never to be seen as again: trash.

But India’s not alone in struggling to control the secrets of her past. Eloise and Finn, the school’s golden couple, aren’t all they seem to be. In fact, everyone’s life is infinitely more complex than it first appears. And as India grows closer to Finn and befriends Eloise, threatening the facades that hold them together, what’s left are truths that are brutal, beautiful, and big enough to change them forever… 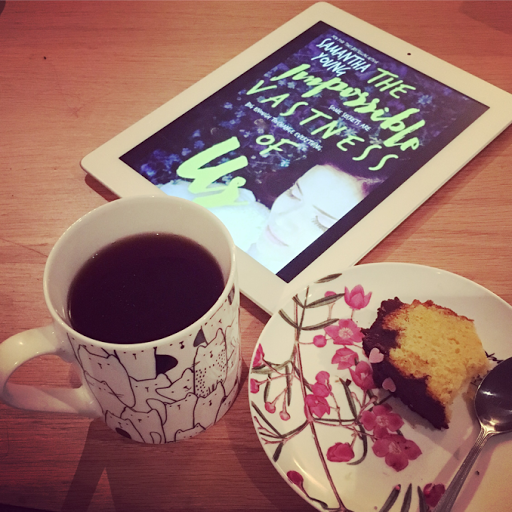 I wasn’t really sure what to expect from The Impossible Vastness of Us – I am just starting to get into contemporary YA And it felt bit clichéd and maybe a bit self indulgent at the start (although maybe that was just our teen protagonist, India), but by halfway I was pretty hooked and invested in the story line.

Throughout the book a number of issues that can be important to teens are raised, and I feel like they were pretty well dealt with (in a Degrassi, or vintage 90210 kind of way). That said, these are the kind of issues that could use some trigger warnings, so if this is something you look out for I’d suggest finding out a bit more before you read.

Given how quick a read this was I thought that the character growth was really good – the kids go through some stuff and really seem to learn from it, and to get an appreciation for others’ point of view. In particular I felt like India was much more likeable by the end of the book.

The Impossible Vastness of Us by Samantha Taylor is out now from Harlequin Books. I received an e-book copy in exchange for an honest review, but only chose to read it because it sounded like something I would enjoy (life’s too short to read books we don’t think we’ll enjoy). All opinions on my blog are my own, and I wouldn’t tell you it was good if I didn’t really think so. =)