I had been hearing a bit of buzz about One of Us is Lying, and I was intrigued when it was pitched during the TeenCon session, and so I was really excited when I had the opportunity to review it. 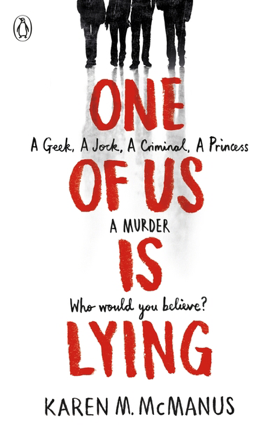 Bronwyn, the brain, is Yale-bound and never breaks a rule.
Addy, the beauty, is the picture-perfect homecoming princess.
Nate, the criminal, is already on probation for dealing.
Cooper, the athlete, is the all-star baseball pitcher.
And Simon, the outcast, is the creator of Bayview High’s notorious gossip app.

Only, Simon never makes it out of that classroom alive. And according to investigators, his death wasn’t an accident. He died on a Monday. But that Tuesday, he’d planned to post juicy reveals about all four of his high-profile classmates. Now, all four of them are suspects in his murder. Are they guilty? Or are they the perfect patsies for a killer who’s still on the loose?

I don’t think I’ve read a book with a Bronwyn in it before, and look – she’s the brain! – so book probably had a head start from the beginning haha
The story was told in alternating POV, with chapters swapping between the four mian characters (suspects?). I liked this because it gave bits and pieces of each character’s story at a time, and I also had the feeling of being one of them trying to piece everything together – worrying about who to trust and the shock as one secret after another was revealed. I also enjoyed getting to know all the characters, and watching them and their relationships change as they went through this experience together (but also apart).
Whilst I couldn’t put this down as I read through, I have to admit I didn’t love the ending – or, more precisely, how the responsibility for the death was resolved…
Despite this, I thought it was a good read. It is being pitched as a cross between The Breakfast Club and Pretty Little Liars, and I think it is definitely more like PLL (with a dash of Gossip Girl) than Breakfast Club (I mean, we learn that there is more to people than their stereotypes, but they are really only in detention for a little while at the start)
I gave this 3.5/5 stars (it was looking like 4 for most of the book, but that the but that bothered me with the end knocked half a star off)
One of Us is Lying by Karen McManus is out now from Penguin Books Australia. I received an e-book copy in exchange for an honest review, but only chose to read it because it sounded like something I would enjoy (life’s too short to read books we don’t think we’ll enjoy). All opinions on my blog are my own, and I wouldn’t tell you it was good if I didn’t really think so. =)