I love fairy tales, and this year have been going through a bit of an obsession with reading retellings of all kinds.My latest fairy tale read, middle grade book The Ice Maiden’s Tale, is a bit different – it’s an original fairy tale author Lisa Preziosi wrote after being inspired by this quote by Michelangelo:
“I saw an angel in the marble and I carved until I set him free” 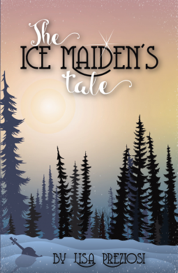 Two siblings, Johanna and Casper, need to be babysat by their neighbor, Mrs. Kinder. She’s the weird old lady that all the neighborhood children think is a witch. She doesn’t have a TV and so tells the children a story to keep them occupied. Her story follows a Sculptor who thinks he sees an angel in a piece of ice and carves her, and a Sorcerer who wants to bring that Ice Maiden to life. As the children deal with the difficult family issues they are facing, Mrs. Kinder helps them cope by telling them this intertwining fairy tale about hope, love, and redemption.

I really loved how this was written as a book inside a book! The interactions between Mrs Kinder and the children kind of grounded the story in our time, and seeing snippets of their lives, and how these related to the Ice Maiden’s Tale added to the story. I think I would have liked to have had a bit more closure about the family issues, but at the same time, that wasn’t really the focus of the book so it doesn’t really need to be there.

The fairy tale itself, as read by Mrs Kinder to the children, was wonderful – I have no idea what it is about that sort of story telling, whether its in the language, or the sentence construction, or what, but every single word sounds and feels just exactly like an old fashioned, traditional fairy tale.

Being a traditional fairy tale, there is some darkness in the story, but I felt like it was at a level appropriate for middle grade readers.

Overall this was a fun read that, despite the ice, left me feeling warm and nostalgic.
I gave it 4 stars out of 5.

The Ice Maiden’s Tale by Lisa Preziosi is out now from Xist Publishing. I received an e-book copy in exchange for an honest review, but only chose to read it because it sounded like something I would enjoy (life’s too short to read books we don’t think we’ll enjoy). All opinions on my blog are my own, and I wouldn’t tell you it was good if I didn’t really think so. =)