I really enjoy historical fiction. It is such an easy way to learn some history, and with all their scandal and battles for power historical fictions set in royal courts are especially fun. That’s what led me to pick up Anne O’Brien’s The Shadow Queen when I saw it was available for review, and I was really glad I did! 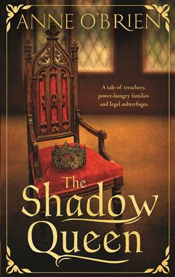 When I first started reading I felt a bit nervous – I haven’t been enjoying 1st person POV, especially with a young protagonist, and the story opens with Joan of Kent at about 12 years of age. However, Joan’s voice, while capturing the feeling of youth, really felt more like a much older Joan reflecting back on her life. It was easy to read, and I was very quickly caught up in the intrigue and scandal of King Edward the Third’s fourteenth century court.
One of the things I enjoyed about sharing Joan’s point of view was that she is written as such a strong woman – she isn’t afraid to admit (first to us, her readers, and later to those around her) that she craves power, she is beautiful and not afraid to use that to get what she wants (and, to be fair, how many advantages did a woman really have in those times?).
For the most part I found the story really well paced, although for me it seemed to drag out a bit around Richard II’s coronation.
I was really excited to see how many historical fiction novels Anne O’Brien has written around this time period, and am keen to read some more – probably starting with The King’s Concubine  about Alice Perrers, who we meet in The Shadow Queen.
This would be a great read for anyone who already enjoys a royal historical fiction – I thought the feeling  was similar to books like Wolf Hall – or for someone who is interested in getting into those sorts of books, since the writing felt really accessible (I feel like I’ve seen this classified as YA).
I gave it 4/5 stars (more please!) 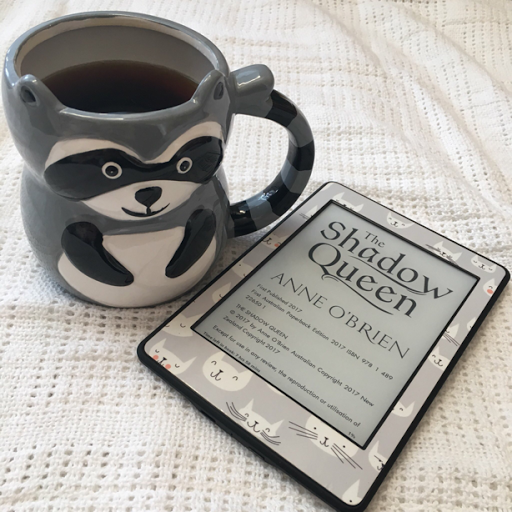 The Shadow Queen by Anne O’Brien is out this week from Harlequin Books. I received an e-book copy in exchange for an honest review, but only chose to read it because it sounded like something I would enjoy (life’s too short to read books we don’t think we’ll enjoy) and I wouldn’t tell you it was good if I didn’t think so. =)

One thought on “Review :: The Shadow Queen :: Anne O’Brien”