Some see it… Some don’t…
People in the town of Deer Park, Texas are vanishing. There is a strange museum, known as Quinsey Wolfe’s Glass Vault, that appears overnight. Perrie Madeline’s best friend and ex-boyfriend are among the missing. Perrie, along with her friend August, go on a pursuit to search for them in the mysterious museum. Could the elusive Quinsey Wolfe’s Glass Vault have anything to do with their disappearances? 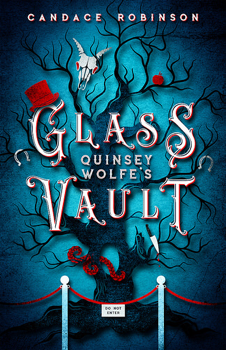 My feelings about this book are a bit complicated. Overall, this wasn’t quite the right book for me right now. Call me a crabby old lady, but I’ve read a few books lately with a young narrator and first person POV they have just got on my nerves a bit. BUT there were some things I loved about this book, and one of the things I didn’t like was that it finished too soon – the pacing wrapped up the end too quickly for me and I wanted to know more about these characters!
I think wanting more is the mark of a Good Book, so I thought I’d share my top three favourite things about it:
I know I said top three, but I can’t not mention how much I love the cover of this book!
I gave it 2.5 stars (not quite my cup of tea, but you might love it).

Quinsey Wolfe’s Glass Vault by Candace Robinson is out now. I received an e-book copy in exchange for an honest review.

I finished reading A Holly Jolly Christmas by @author_katiemontinaro today. I'm always keeping an eye out for Christmas romances with summer setting that reflect our experience and I thought this one had a great Aussie feel to it. I loved the characters and the way the relationship developed, and also really appreciated the bits about real life vs what people present to the social media world (I felt like this was done thoughtfully and without feeling judgey).
I read this beautiful book - The Goodbye Year by Emily Gale - on the weekend and have popped some thoughts up in a review on my blog (bookishbron.com). It was truly such a lovely, heart-warming, hope-filled story, set in protagonist Harper's final year of primary school - which just happens to be 2020. I found the writing really sensitive and authentic, and enjoyed every moment with Harper as she navigated friendships and family changes and growing up all with her world turned upside down. I loved the supernatural elements to the book too, and the way those parts of the story complemented Harper's experience so well (I don't want to give spoilers!) Check out my full review on my blog where I'm recommending this one for kids who love a contemporary story they can relate too. I also think this would be a lovely one to read with the young people in your life, either as a read aloud or separately to talk about together.
We had a lovely weekend in Sydney - obviously we started with the big @dymocksbooks on George St, which was looking very festive!
My next read is going to be this gorgeous dark fantasy novel by @talltales_poppynwosu 😻 ioved the short story and novella prequels and can't wait to get into this! Poppy kindly sent me the copy but it's out very soon - tomorrow I think! ❤️
Currently reading @kate.schumacher.writer’s HEART OF FLAME, which comes out I. Just a few days (Kate sent me this free early ecopy for review).
I always love seeing what my 8yr old brings home from the school library - recently she borrowed this book, a Tudor girl's diary about Catherine of Aragon by Alison Prince.