Do you ever read something and that starts you off on a hunt for as many books with a similar theme as you can find? This happens to me pretty often – I pick something up and all of a sudden need to read alllll the books about witches, or cults, or coming of age, or space operas, or classics, or whatever. I can’t remember what it was that started me off on this one, but at some stage late last year I decided I wanted 2017 to be the year of the fairytale/myth/classic retelling. So when Alice: The Wanderland Chronicles – a YA Alice retelling with a zombie twist – popped up on Net Galley, requesting a review copy was a total no-brainer (see what I did there? Zombies? Brains? Ha!) 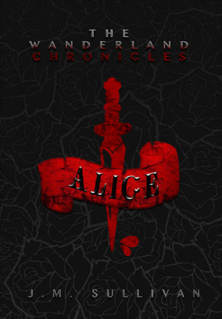 I am always here for an Alice retelling. And yes, there are a bunch of them. But I felt like this one stood out from some others that I have read because the story would have been just as good without the Alice link, rather than depending on it. This meant that the plot moved smoothly, where sometimes a retelling can have bits that feel like they have been forced to fit the original story. The characters were interesting in their own right, and the Alice-y bits add fun to an already compelling plot – I loved seeing how the characters we know from traditional Wonderland would pop up.

I also liked that it didn’t feel like the momerath (Wanderland’s zombies) were just there for the sake of having zombies. I haven’t read a lot of zombie-ish books before, so didn’t really know quite what to expect, but I felt the world building was good enough that the momerath really fit into the story. There was plenty of blood and brain matter, but without it being enough to feel gratuitous.

One of my favourite parts of the book was a bonus chapter at the end, which re-tells an earlier chapter from another character’s perspective. I loved seeing what J.M. Sullivan could do from behind a different set of eyes, and for me it was perhaps some of the best writing in the book. It also made me really excited to see what J.M. Sullivan has in store for these characters – and is, as readers – next.

Obviously I really enjoyed this. I had originally given it 3.5 stars(out of 5), but that alternative chapter bumped me up to 4 (more please!)

Alice: The Wanderland Chronicles by J.M. Sullivan is out now from Pen Name Publishing. I received an e-book copy in exchange for an honest review.

One thought on “Review:: Alice: The Wanderland Chronicles :: J.M. Sullivan”