Another middle grade war book today – this time we are in the US in 1968. It’s summer and Joyce has moved into a tent on the roof  because everything in her house is too weird (her sister sees UFOs and her brother is MIA in Vietnam). 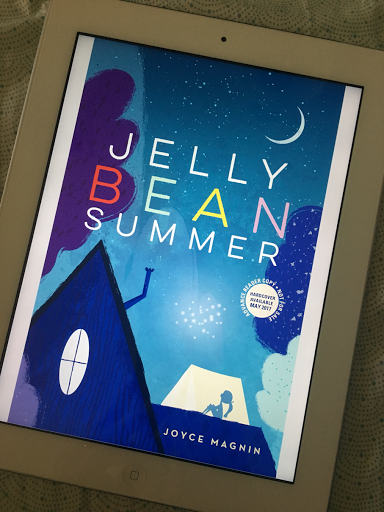 Magnin has done a wonderful job of writing from a child’s point of view. I found the voice of the narrator really authentic – Joyce feels naive, and young, and hopeful all at once. It also manages to capture that frustration of feeling like the ‘grown-ups’ aren’t telling you everything, and the tension of wanting to know, but also wanting to stay carefree. I think my favourite thing about this book was how personal Joyce’s narration was – it often feels like she is writing a journal, or confessing to a friend.
I like the way the book gives a young reader some exposure to war and its consequences – there is some discussion about death, and the fact that soldiers might be expected to kill, and a character whose brother had been killed – but without being too confronting, or, I guess, scary. I don’t have a lot of experience with middle grade readers (apart from having been one myself quite some time ago!), but this felt like a good way to introduce and start to explore some of these issues.
As well as the exploration of these themes giving the reader a lot to think about, the story itself was a lot of fun. I love a kid scheme/project – those crazy plans that an adult would never even think of, but kids are convinced just couldn’t go wrong.
Overall it’s a fun summer read (with a gorgeous cover!) – I gave it three stars.