I think I mentioned in my first post that I have just recently discovered booktube, and have been loving watching fellow book-lovers talk about their favourite books and bookish things. One of differences I’ve noticed between booktube and, say,  podcasts, or bookstagram, or other online places where I’ve been getting book recommendations, is that booktubers seem to talk a lot more about backlist favourites, rather than just the newest buzzy releases.

One new to me author who kept popping up in videos I was watching was Daphne du Maurier, and after hearing Simon (Savidge Reads) and Lauren  (Lauren and the books) talk about how they adore her I just had to check her out.
I picked up My Cousin Rachel as my first du Maurier, partly maybe because Lauren had just been talking about it, but maybe also it was checked in at my local library, while a couple of her others weren’t currently available. I then saved it to read on a rainy day when I was home on my own (except, of course, the cats!) and could sit down and just read for hours. And read for hours I did – in pretty sure I finished it across two sittings, both on the same day. 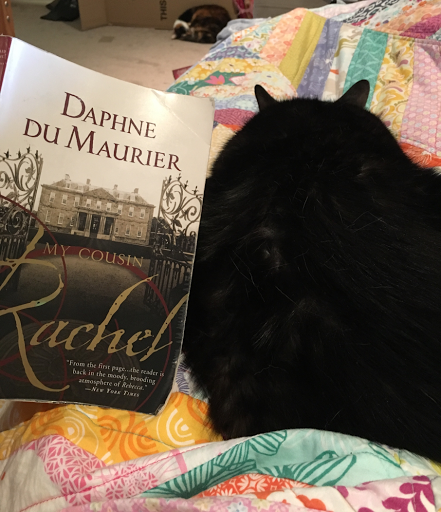 I really loved reading this! I’m not quite sure what there is that I can say about du Maurier that hasn’t been said hundreds of times before – the settings of the book (there are bits in both England and Italy) were so well written, and I had that wonderful sense of uneasiness that good Gothic fiction gives right from the beginning and all the way to the last page.
I think my favourite thing about this was that creepiness – it is really amazing that the writing, and that fact that you know something is coming, can make  the reader feel uncomfortable even though nothing sinister is necessarily happening (does that even make sense?).
Reading My Cousin Rachel reminded me a lot of the experience of reading We Have Always Lived in the Castle by Shirley Jackson (which was one of my favourite books last year) – not necessarily because of the plot, but I thought the feelings of the books were similar. I’d definitely recommend one to someone who enjoyed the other. At first I thought perhaps they made a bit of an odd pair, but both do Gothic so well. And the more I think about it now the more it makes sense.
I also really enjoy the story telling technique used in My Cousin Rachel, where you find out at the very start that A Thing has happened, and the book then proceeds to put together all the pieces that led to that Thing (a similar approach is taken in Big Little Lies – and really liked it there too).
As I mentioned above, I borrowed My Cousin Rachel from the library – I liked it enough though that I’ll be keeping my eye out for a nice edition to buy (I love the covers on the Virago Modern Classics ). It has also whet my appetite to read not only more du Maurier, but also more classics in general.
Bron x

One thought on “Review :: My Cousin Rachel :: Daphne du Maurier”