Hellooooo! Let’s do a little TBR update! I think I’m going to do these monthly, but let’s see how it goes. I am pretty sure though that they’ll be quick, and probably have not the best photos (Assuming I can figure out how to get photos with in – it isn’t working out so well just now!) – if I get to hung up on how much I have to say, or how pretty the pictures are, I’ll be intimidated and put off posting and just never do it. Anyhow – let’s see what I’m hoping to read in April! 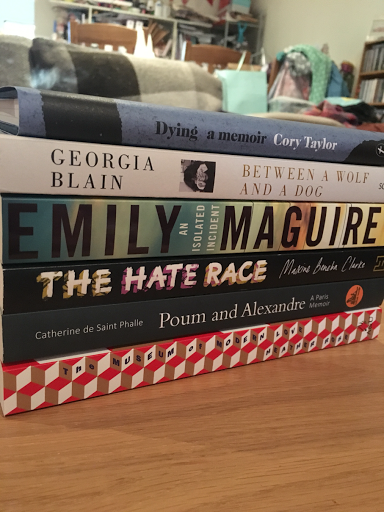 My plan is for my April to be mostly about reading my way through the Stella shortlist. I ordered a pack of the six shortlisted books from Readings, so I have them all here ready to go. I’ve actually already read The Hate Race and Between a Wolf and a Dog – both of which I have LOVED. I’m hoping to get through them before the Stella prize winner is announced on April 18 (let’s be honest – I think I’m cutting it a bit fine!)

So, as well as the four remaining Stella shortlisters, I have a four out from the library, which I might cover in a separate library haul post =)

That’s 8 more books this month, which sounds like a lot but I do have most of the month off work (I also ALWAYS overestimate how much/quickly I can read!) so let’s see how it goes =)

One thought on “April TBR”

It's @cbrwritersfest weekend and I had great time in the Catch Me if you Can session about crime writing, featuring @shelleyburrwrites @jackheathwriter @sandihughlogan and @ayliffetim.
I’ve had one of those weeks where nothing is really wrong but the weekend just can’t come soon enough! I’m hoping to spend some of my time in bed with a good book - my current read is a cosy autumn murder mystery called Put Out to Pasture by Amanda Flower - it has been just right for the wet weather we’ve had this week!
New review up on my blog tonight of Five Bush Weddings by Clare Fletcher. I was super lucky to win an ARC of this one from the lovely @penguinbooksaus team, which was perfect since I’m on a mission to read and talk about Aussie romance books (so many of the titles I’m seeing around the shops and socials are from OS authors!)
I’ve read some really amazing fantasy books by Aussie indie authors lately, and I couldn’t be more excited to have these two arrive in the mail!
Weekend coffee table.
Happy book birthday (yesterday!) to @clarefletcherwriter and FIVE BUSH WEDDINGS. I was lucky enough to win an early copy from the lovely team at @penguinbooksaus and I'm really enjoying it! Who else has this one (or another Aussie romance) on their bedside table right now?